Background: Lyme disease is the most common insect-borne infectious disease in the US. The American health authority CDC estimates that there are 10% to 20% of patients after the antibiotic treatment of Lyme disease who have a continuation, and a further worsening, of symptoms (Post-Treatment Lyme Disease Syndrome – PTLDS). So far, little is known about the effects of Lyme borreliosis and the resulting cost of the treatment of PTLDS.

The Johns Hopkins University (JHU), the first university in the US, researched and taught after the scientific model of German universities. It was was founded in 1876.

The present study was commissioned at the prestigious universities in the United States & the work has been applied retrospectively, which means it relies on data from the American health insurers from 2006 to 2010. 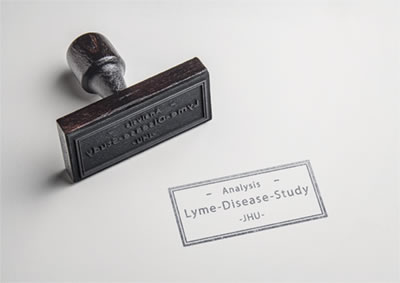 1* Within 30 days after diagnosis of Lyme disease, antibiotic therapy was initiated.

3* The patient was either insured by his employer or had private health insurance, so that the necessary data was available.

4* The patient was younger than 65 years.

Only the records that meet these 4 criteria could be included in the study. After selection of the 547 993 Lyme disease patients there were 52,795 evaluation enabled records available.

The comparability of the data sets is critically dependent on the characteristics and the size of the control group. In the study, a Lyme patient was matched with 5 persons without Lyme disease diagnostics with the following criteria: Gender, age, region of residence. The control group in this case consisted of 263 975 people. The ratio of 1 to 5 increases the scientific significance and therefore the relevance of the study. „Controls for case-control studies find“ The Lancet article from 2005 describes this effect as the „Power of the study“.

o What are the financial implications of Lyme disease on the American health care system?

o What is the link between Lyme disease and the PTLDS, and how likely is it to develop PTLDS?

o What are the financial burdens on the American health care system caused by the post-Lyme syndrome?

Results of the study:

What are the financial implications of Lyme disease on the American health care?

o $ 2,968 higher total treatment costs on average per person in the Lyme disease group compared to the control group.

o 87% more outpatient contacts in a period of 12 months and $ 2,125 higher costs for outpatient visits on average per person in the Lyme disease group compared to the control group.

o 71% more hospitalisations of Lyme disease patients in a 12-month period and thus $ 230 higher costs on average per patient from the Lyme disease group compared with the control group.

What is the link between Lyme disease and the PTLDS, and how likely is it to develop PTLDS?

o 63.1% of Lyme disease patients showed clinical symptoms, which are brought together under the abbreviation PTLDS. The control group, however, showed only 27.6% of subjects with similar symptoms. The risk for the development of symptoms, which are compatible with PTLDS, is for Lyme disease patients – after antibiotic therapy – 4.77 times greater than in the control group.

What are the financial burdens on the American health care caused by the post-Lyme syndrome?

o The average treatment costs per LD patient with PTLDS are $ 3,798 over the cost of treatment of Lyme disease patients without PTLDS.

o Outpatient contacts of patients with PTLDS were 66% higher compared to patients without PTLDS over 12 months. This resulted in outpatient treatment costs $ 2,786 higher in the PTLDS group.

o In addition, there are 89% more emergency contacts in the PTLDS group.

It can be seen that the patients who have developed PTLDS after the initial antibiotic treatment, caused significantly more costs than the Lyme disease patients, where it has not led to the development of PTLDS.

It can also be seen that 63.1% of the antibiotic treated Lyme disease patients have developed PTLDS.

Resume: The study has shown that Lyme disease patients, despite antibiotic therapy, generate far more costs in the healthcare system than patients who are not infected with Borrelia.

63.1% of Lyme disease patients showed clinical symptoms, which are brought together under the abbreviation PTLDS.

The risk for developing symptoms from the PTLDS for Lyme disease is 4.77 times higher than in the control group.

This study illustrates that the existing treatments are either qualitatively, or quantitatively, in a position to prevent the development of PTLDS.

The link to the original study